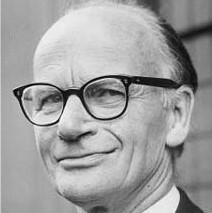 Stephen Potter (1900–1969) was an academic, producer and author, best known for his classic The Theory and Practice of Gamesmanship and series of sequels. He taught at Birkbeck College, before joining the BBC as a writer/producer in 1937. After the Second World War, Potter became a freelance writer and wrote the series of bestselling books which made his name. He lived in Aldeborough, Sussex, and was good friends with Benjamin Britten. He died of pneumonia in 1969.